Villages that seem to come out of fairy tales, enchanted forests and lakes among the most instagrammed of the web: the northernmost region of Italy is still the first in the ranking for the quality of life. And how can we not believe it? However, to be correct, we would like to tell you that the region is called Südtirol before South Tyrol, did you know that? But let’s go orderly…

A LITTLE BIT OF HISTORY

No, don’t worry, it won’t be the classical history lesson that you tried to avoi when you were a student…all we want to do is “dot the i’s and cross the t’s” so as to explain the reason of bilingualism. It seems necessary to us, as you may have the doubt that the people of Südtirol speak preferably German rather than Italian. And don’t forget that in some valleys Ladin is also spoken, a language of ancient Neolatine origins, but that preserves typical pre-Roman features, derived from Celtic.

Quickly. Everything happens after the Saint-Germain pact, signed in 1920 in Paris, where, at the end of the Great War, the Austro-Hungarian Empire was dismembered: the beautiful region of Tyrol (Austria) was divided and the territories to the south of Brenner were annexed to Italy.

With the advent of Fascism in Italy, by the politician Ettore Tolomei, Südtirol was Italianized in Alto Adige, as were all its localities: Sterzing became Vipiteno, Brixen-Bressanone and Bozen was Italianized with Bolzano.

Everything is clear now? Südtirol has a slightly different DNA from the rest of Italy: we like to think that Habsburg rigour, punctuality and precision blend with Italian creativity, hospitality and solarity to create an almost perfect reality.

Like all regions, South Tyrol seems small, but it’s not. What we would like to say to you to enjoy your trip to the fullest is to focus your holiday in a specific location and , of course, organize it. It would’t make sense to choose a hotel in Merano and visit the Three Peaks, risking losing time in traffic and endless roads.

Speaking of traffic, let’s open the theme Christmas markets: one of the most magical periods to visit the various villages in South Tyrol, but certainly crowded and not little, for the happiness of the locals.   However, we have to tell you about the dream atmosphere you’ll find here: under the snow and the Christmas lights, you’ll feel like you’re in a real nativity scene.

Beyond the Christmas markets, South Tyrol offers its guests numerous traditional events. We would like to point you out:

The parade of the Krampus, or demons, accompanied by various entertainments – around December 5;

Almabtreib, the celebration of the return of the cows from the mountain pastures, which will parade all dressed up – first days of September;

Törggelen, the celebration of novello wine and chestnuts, with which you will make an excellent snack – from September throughout the autumn.

And for the “taste wants its share” series, what can I say? Here you are in the realm of great traditions based on game, served from starred restaurants, to mountain huts.

Canederli, spätzle, maultaschen (ravioli), cheeses – strictly from the mountain pasture – of all kinds.

But there is also a large production of sweets, such as the Apfelstrudel, or apple strudel, the Kaiserschmarrn and the egg-based Strauben, served with small-fruit jam.

As you can see, your appetite won’t be left unsatisfied.

The main city is Bozen/Bolzano, that is cold in winter and hot in summer, home to the various administrations and university. Castles, churches, streets, museums: Bolzano will leave you speechless!

Meran/Merano, famous for being the summer residence of Princess Sissi, is also a popular thermal destination.

The Episcopal city of Brixen/Bressanone in the Valle Isarco is proud to have one of the most beautiful and unique baroque domes in Italy.

In addition to these major localities, the South Tyrol is composed by many valleys, and some of them are part of the common imagination of the typical idyllic mountain place.

Let’s discover them together. 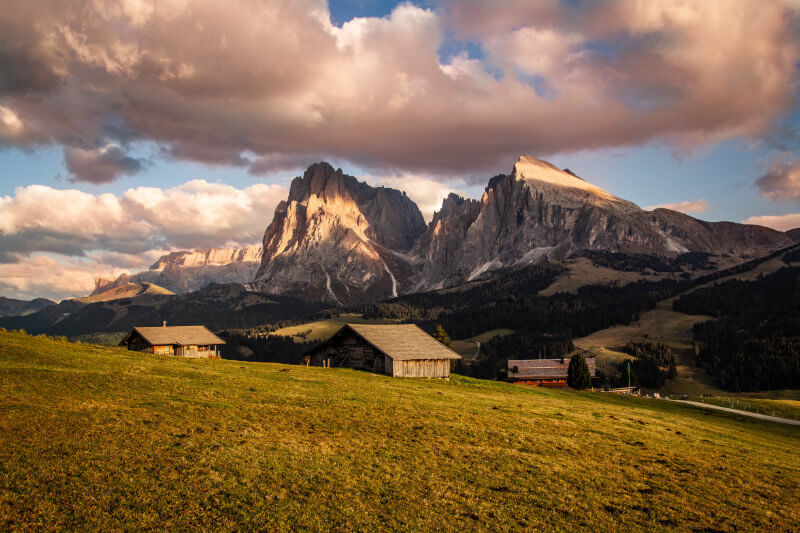