On the shores of an alpine lake

The Gubert Family welcomes you

Do you know why the holiday at the Plank Hotel in San Martino di Castrozza is extraordinary? For everything that will remain in your heart, from the arrival to the stay, to the departure… to the return. Yes, because the probability of wanting to go back isn’t high, it’s certain.

You will be immediately struck by Cupid’s arrows: a small lake with ducks, a large playground and a well-kept garden will lead you to the hotel’s entrance, which stands out in front of a thick forest of fir trees, all to be discovered along the myriad of paths that lead into the green and the agility forest. If your the season is winter, you will immediately notice the cross-country ski run, the Prà delle Nasse ski school camp and the start of the ski lifts with the new Colbricon Express cable car that will take you in no time to Ces, in the heart of the Carosello delle Malghe, to ski “with taste”.

And when you cross the door, the smile of Annalisa and Antonio awaits you with their sunny welcome and their discreet presence during your holiday.

Their welcoming home will become yours: the rooms so bright and spacious with the warm tones of red, the curious veranda with the incomparable view of the Pale di San Martino, impressive enough to be declared a UNESCO World Heritage Site; the warmth of the crackling fire of the fireplace that combines tradition and contemporaneity, the sun terrace in front of a natural spectacle such as the large crown of peaks and the tourist centre of San Martino di Castrozza; the bar where you can take a break after a regenerating sauna or Turkish bath and a challenge at table tennis or foosball. Everything will reconcile a good night’s sleep in the rooms made even more comfortable by the typical wood of the Dolomite culture.

Do you know how important it is to start the day well with a rich breakfast: do you already smell the scent of the buffet with many genuine choices? The restaurant, then, is divine and for you, Antonio and Annalisa also organize lunches and dinners at high altitude, at Rifugio Colverde, right at the foot of the Pale di San Martino, reachable by the ski lifts Colverde-Rosetta or on foot, with snowshoes, for skiing even at night. 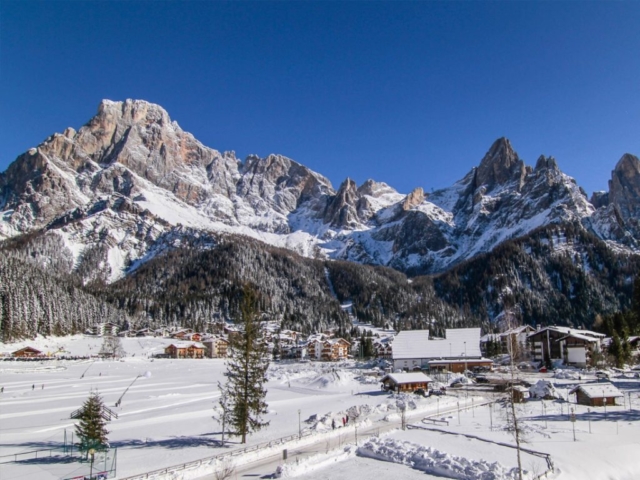